In school, we are taught three states of matter: solid, liquid and gas. Liquid crystals exist between solid and liquid. In nature, liquid crystals are found in plants, shells of beetles, DNA molecules, human bone, wood cellulose and even slug slime. They are also a key component of LCD screens, calculators, digital clocks, watches, and microwave ovens. The research on liquid crystals transcends scientific fields, such as physics, chemistry, biology, and engineering.

Liquid crystals do not emit light directly, but by using their light-modulating properties, combined with polarizers, and a backlight they help produce images in colour or monochrome. Below are some very colourful examples, made in Luxembourg:

Polarizing optical microscope (POM) observation of typical defects on a thin layer of nematic liquid crystal over the water interface.

How do liquid crystals work in an LCD screen?

Liquids crystals are so-called “anisotropic” fluids, which means they easily and strongly respond to external influences, such as electric or magnetic fields, or even particular surfaces. This allows scientists to extend the liquid crystalline order over macroscopic distances, and even in any direction they want. Since this structure appears in a liquid phase, the whole system can be rearranged by simply applying a new external field, resulting in a change of the physical properties.

The reaction happens in milliseconds and is for example part of what happens when you switch on an LCD screen: a small, applied voltage rearranges the liquid crystal, changing the optical properties of a display element – the screen is on! If the electric field is removed, the screen goes back to black.

What role do liquid crystals play in research?

“Liquid crystals offer an amazing playground,” says Prof Jan Lagerwall, who leads a University of Luxembourg-based research group working with liquid crystals: “We are now able to fix them in a variety of shapes such as short fibres and empty or filled spheres, with parallel, layered or helicoidal alignments. Many interesting results from our work actually came up by chance. Some show great potential for useful applications, other are very much more fundamental in nature. This can appear useless today, but who knows about tomorrow?”

Because of how liquid crystals can be changed to so many different structures and lengths, they are playing an increasing role in research projects in nanotechnology and materials science. They make it possible for scientists to synthesize 3D-nanostructured materials, and to align tiny particles like nanotubes.

From tuneable lasers and biosensors to biotechnology and medical treatments, liquid crystals are being put to increasing use in ground-breaking advances in science. Let’s take a look at research efforts in Luxembourg that FNR funding is making possible.

What if there was a low-cost, simple test that we could take in our own home to reliably detect respiratory pathogens? A team of scientists from different fields in Luxembourg are working on a ground-breaking project exploring the power of liquid crystal self-assembly to do just that. At the heart of the approach is making the technology as economical as possible and sharing the instructions for maximum benefit to society.

“The aim is to develop tests that are simple enough to be conducted by the patients themselves in their homes, yet more reliable than current Rapid Antigen Tests and capable to provide a measurable output. With the intent to eventually make these tests available to everyone, everywhere, we adopt a ‘frugal technology’approach, where we minimize the needs for advanced technology and expensive materials, and commit to sharing the research results and technology, in an ‘open source’ format, thus enabling local production of many of the components,”

What would these tests look like and what role do liquid crystals play in making this happen?

In this approach, nose/throat swabbing is replaced by a simple and much less invasive face mask sampling approach that uses water-soluble or swellable filters of non-woven fibres. The liquid crystals come into play in two important areas:

They will be used to help show the results of the test using a standard mobile phone and accessories costing no more than a few Euros. They are also key to the test itself: They will be used in a way where their optical appearance will change if bacterial endotoxins are detected – a completely new way of reliably detecting pathogens.

“We expect our unconventional approach to biosensing to have enormous societal impact on improving global health by enabling economical health screening solutions that can be implemented anywhere in the world, even in remote areas without electricity or other kinds of advanced infrastructure.”

Prof Jan Lagerwall, physicist at University of Luxembourg and leader of the ESMP research group.

The FNR-funded project is a true Luxembourg endeavour: It brings together physicists and biochemists from the University of Luxembourg, as well as nanomaterials and surface functionalisation experts from the Luxembourg Institute of Science and Technology (LIST).

Resembling a solar flare, this image in fact captures the texture of a drying droplet of lyotropic liquid crystals (LLCs). They are obtained by dissolving molecules that have both a ‘water-loving’ and a ‘water-hating’ part, which causes them to form specific accumulations under certain conditions. LLCs exhibit behaviours of both liquid and solid phases.

The different colours seen in the image reveal the emergence of self-organised molecular orientations as the droplet dries. Anupam Sengupta team captured the image using a microscope that polarises light. The radius of the drying droplet is ~250 µm – about the length of a dust mite.

Lyotropic liquid crystal phases constitute one of the fundamental phases of biological fluids, they are hence highly relevant in biomedicine, food technology and physics of living matter.

Physics of living matter is the focus of FNR ATTRACT Fellow Prof Dr Anupam Sengupta at the University of Luxembourg.

Using a cross-disciplinary approach, Anupam’s team studies biological processes and systems under changing environments, with a particular focus on the role of geometry, order and topology in living matter. The team wants to uncover the secrets of how the smallest of living organisms regulate our health and happiness – looking at liquid crystals helps the scientists to take an in-depth look at the world around us.

“Restructuring of microbial networks due to anthropogenic factors can have significant implications for global biogeochemical cycles, microbiomes associated with plants, animals and humans, and ultimately, of the entire ecosystem spanning multiple scales.”

“We have started to track these dynamical processes systematically through a combination of experiments and data-based modelling,”

This striking image that resembles a funky maze in fact shows chiral textures formed by liquid crystals. Co-existing bubbles and streaks have formed because the liquid crystals are oriented upright against the confining surface. The blue ‘streaks’ are an average of ~5 µm – same size as a red blood cell!

Discover more about the research of Anupam Sengupta and his group at the University of Luxembourg below and on fnr.lu

Better sensors thanks to liquid crystals

Researchers at the University of Luxembourg’s ESMP group have pioneered an approach to improve gas sensors – they could even become wearable! Incorporated in clothing or furniture textiles, they can be created to change their appearance in case of exposure to a certain compound in the air, such as gas.

Since the sensor is non-electronic and requires no additional components, it is fully autonomous, requiring neither batteries, power supplies or internet connection. Building on results from several prior fundamental research projects, the group is now exploring this applied potential in the framework of a collaboration with an Italian biophysics research group.

Liquid crystals mix structural arrangements over large scale with an easy-flowing liquid state, and this allows them to appear as beautiful and colourful as peacock feathers or butterfly wings. If exposed to certain compounds, they can change from blue to red or from colourless to coloured.

Scientists also expect that the sensors could be made at low cost and a low environmental footprint.

Below you can discover a range of real photos of liquid crystals in action. Read the description to find out what is happening in each image.

Spherical shells of liquid crystals with helicoidal arrangement function like “selective optical echo chambers”. They give rise to spectacular patterns that can find a variety of uses, for instance in anti-counterfeiting applications.

Liquid crystal shells can be turned solid by connecting all the small molecules making up the liquid crystal to each other in a process called “polymerization”. This leads to a slight shrinkage of the shell, increasing the pressure in the liquid inside the shell, until the shell breaks at its thinnest point. This leaves every shell with one hole, as seen in this electron microscopy picture. The hole is very useful when applying the shells, because it allows access to their outer as well as inner surfaces.

Here liquid crystal shells are observed from the side, gravity making them thicker at the bottom and thinner at the top. This asymmetry translates into gradually varying optical behaviour from bottom to top, giving rise to the variation in colour seen when observing the shells in an optical microscope.

This picture shows a liquid crystal phase transition from parallel to layered order taking place in a set of thin shells. Because the shells are produced in a microfluidic pathway giving highly reproducible results, they are all identical in diameter and thickness, but each shell nevertheless shows some unique characteristics due to thermal fluctuations of the liquid crystal order.

Once the phase transition started in the above picture is complete, a regular array of curved layers constitutes the steady state, giving rise to a beautiful flower petal-like texture in all the shells. 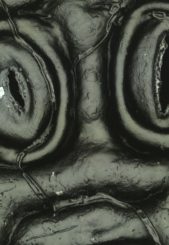 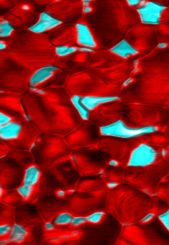 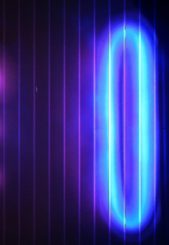 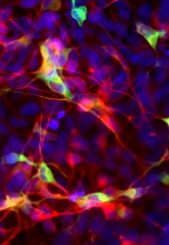 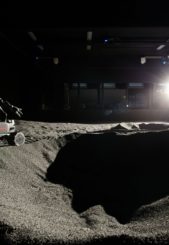 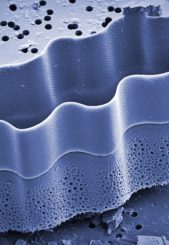 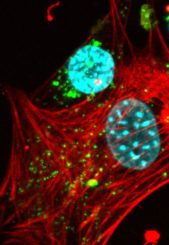